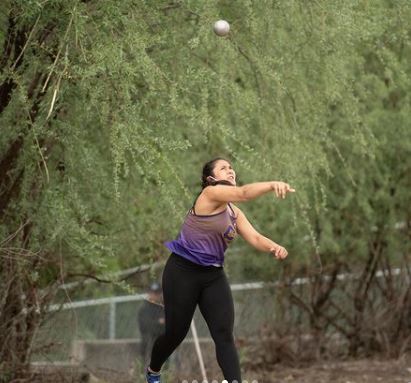 Cascade Christian senior Madalynn Strain celebrated another trip around the sun with not one, but two victories in a girls track and field meet with St. Mary’s and Sutherlin. Strain cruised to victory in the shot put and gave Cascade a 1-2 finish in the discus, with Maddie throwing a 91-03.5, to sophomore Lainey Pierson’s 75.00.25.

Senior Kat Devitt took home a win in the 100 meter hurdles, and the Cascade newcomer placed third in the 200, just two seconds off the pace set by St. Mary’s Jensyn Ford. Sophomore Allison Cramer was third.

In other running events, Elliana Vanlandingham placed third in the 400, and in the 1500, junior Katie Erno and sophomore Rose Hehn established new PR’s of 6:20.56, and 6:47.99 in the 1,500. Autumn Murray finished second in the 300 meter hurdles. The Challengers 4×100 relay took a close second place to the Crusaders.

In other field events, Murray also finished third in the long jump, and Pierson placed third in the javelin. Cramer established a new PR of 29-00 in the triple jump.