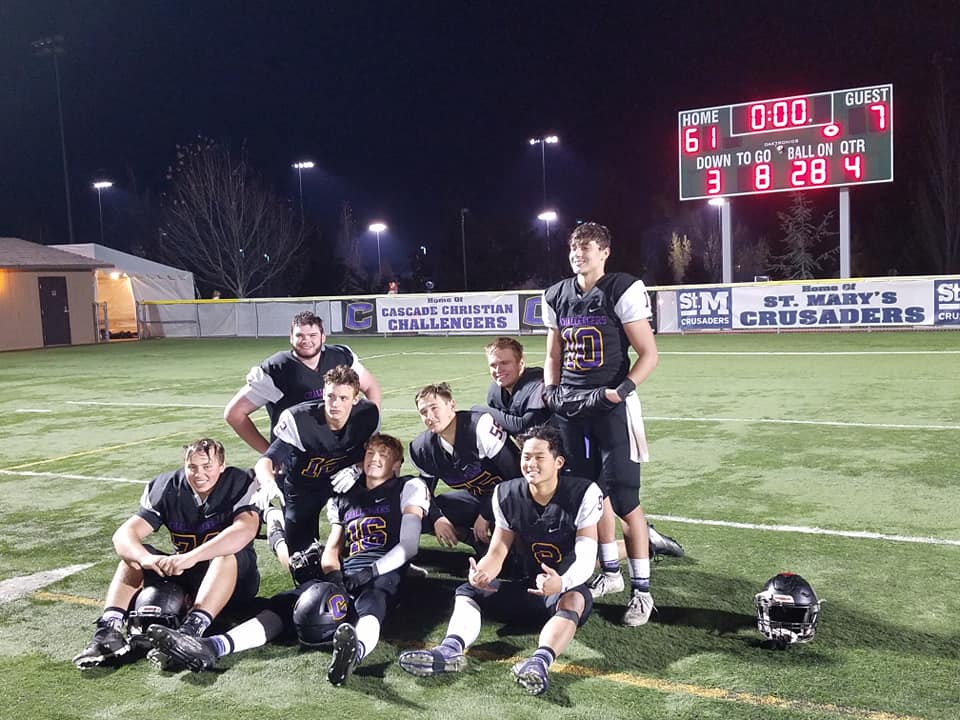 In dealing with the St. Mary’s Crusaders, observers had one key question: what would the Cascade Christian Challengers do with 6’5 receiver Tra Foster? The Challenger brain trust had an aswer: cornerback Matt McPheeters. The transfer from Eagle Point snagged two big interceptions, and Cascade had six overall in a 61-7 romp over their crosstown rival.

St. Mary’s could move the ball in stretches, but when pressed to pass, the Challengers pass rush put QB Aliloa Kaia- Wailahua under duress, and the result were the turnovers- including picks by Kristian Fralich, and an INT by Tyler Almasy late in the game against Crusader reserve Bo Aldrich.

The Crusaders also suffered a hope-crushing turnover when a deflect pass from Kiegan Schaan was intercepted, but was fumbled by St. Mary’s on the same play.

Offensively- Schaan got things going by scampering in on a 59-yard run to opening the scoring. On senior night, he ran for 151 yards and passed for 208 more. RB Elijah Smith- another Challenger senior- ran for 137 and two scores. Senior WR Cade Sample hauled in a scoring pass, while junior Kristian Fralich had 144 receiving yards with two TD catches.

Now- the Challengers get ready for the playoffs. By virtue of their number eight seeding, they will host Sutherlin this Friday. The winner of that game will likely get a re-match with Hidden Valley in the quarterfinals.