These results may be a little late in coming down, but we would be remiss if we didn’t chronicle the accomplishments and progress of the Cascade Christian boys and girls swim teams.

The Cascade Christian boys 200 yard medley relay team of Elijah Snyder, Braedon Scaglione, Will Pierson, and Owen Harrington took third behind teams Grants Pass and Ashland with a time of 1:55.85, nearly a second better than their seed time.

The same quarter formed a relay team for the 200 yard freestyle. With a time of 1:41.15, they were just edged out by Grants Pass for second place.

Snyder scored points for Cascade by finishing 11th in the 200 freestyle. Numerous other boys and girls swimmers, some competing for the first time, swam events at the meet and gained valuable experience under new head coach Christian Scaglione, a CCHS grad. 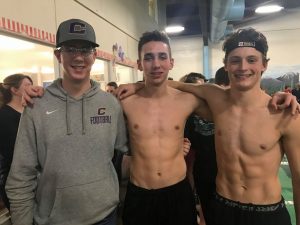