With 22 goals and 2 assists, Cascade Christian’s Bryton Plankenhorn is the Special District 5 Player of the Year in girl’s soccer. On the boy’s side of the ledger, Challenger Jonny McCoy was named Special District 5 Player of the Year in boy’s soccer after a season in which he scored 16 goals and dished out 6 assists, while also playing part-time on defense. Joining them is net minder Caleb Knight– with four clean sheets, three more games where he allowed only one goal, and a pair of blocked penalty kicks, he earned the “Golden Net”- an award for the league’s best goalkeeper.

On the boy’s side, forward Donminic Lewis, midfielder Cody Reece and defender Justin Fairbanks were first team selections. Midfielder Cody Havniear was an honorable mention. The Challenger boys earned a 9-5-2 mark in their recently concluded campaign. 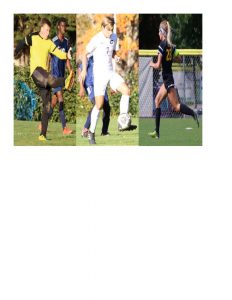