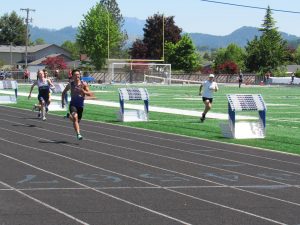 You know you’ve done well in a track meet when you’re a runner-up that missed first by just four points. Creswell edged Cascade Christian 122-118 at the 3A Speciald District 4 meet in Sutherlin. A Challengers girls team that didn’t have a lot of numbers made up for it in strength of performance.

Cascade Christian wasn’t short on winners. The 4×100 relay team of John and Kristian Fralich, Wyatt Lewis and Levi Ellerbeck bested Brookings-Harbor. Lewis won the long jump with a personal record of 20-06. Collin Marshall also scored a PR and win in the discus, tossing the dish 149-05, and finished fourth in the shot put. Gabe Pierson scored a top ten and a PR in the shot. Will Pierson set a new personal mark of 5’8″ in the high jump with a fourth place leap. Logan Flenner launced the shot put a distance of 49’5″- a new PR, and good enough to win a state berth with a first place finish. Freshman Jake Sorani took home a second place run in the 3000 meter run with a 9:46:15. He finished third in the 1500. Griffin Scott, Kristian Fralich, Levi Ellerbeck and Wyatt Lewis finished second in the 4×400 relay.

In other boys highlights- Levi Ellerbeck finished third in the 100, and fifth in the 200. Elijah Murphy scored a PR with a fifth place performance in the 800 with a 2:12:39. Sophomore Ethan Rathburn set a new personal record with a 18-00 in the 110 meter hurdles. He also took third in the triple jump.

The top two individual finishers and top two relay teams in each event get automatic bids for state. There are also wild card entries, determined by times and distances at district meets.

In girls competition- Abbey Alexander won the discus and a trip to state. The senior also finished second in the shot put with a PR of 37’4 1/2″. Grace Boisen scored a second place run and state berth, finishing second in the 100 meter hurdles. She also placed fifth in the long jump.