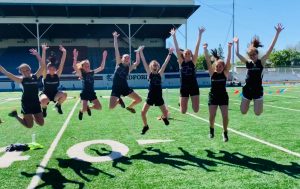 The Cascade Christian Middle School trophy case is going to have something new and shiny it, thanks got the performance of the 7th and 8th grade girls at the SOMSAC Small Schools District Meet at Speigelberg Stadium in Medford Wednesday. Out of 12 teams, the Challengers were number one.

The hallmark of this team is depth. There is talent everywhere on this team. For example, in the long jump, CCMS’ Autumn Murray, Sierra Samhammer, and Molly Griffin finished first, third and fourth respectively. Murray edged out Sydney DeBoer of St. Mary’s by one inch with a 14’6 1/2″ leap. Murray edged out Samhammer for top honors in the 100 meter hurdles- 17-31 to 17-95. Both were PRs for Autumn and Sierra.

Samhammer was also part of a 4×100 relay team that took second to a very strong Sacred Heart relay team. Sierra, McKenna Coggins, Bella Williams, and Elliana Vanlandingham ran as a crew in that event.

Samhammer- perhaps best known as a BMX racer- does quite well on her feet. Her day also included a second-place PR run in the 400 with a 1:07.96. Vanlandingham also set a new personal standard with a 1:11.16.

Speaking of Coggins, McKenna scored a first place finish and a PR in the 100 meter dash with a 13.26. Emi Williams made top five in that event with a 14.41.  Kylei Potter also set a personal record in the 100 with a 15.18. Williams PRed in the 200, while finishing sixth. Kayla Dexter PRed with her top ten finish in the 200 event.

Rose Hehn leads the way in Challengers distance running. She captured the 3k meter run as the only competitor. She also finished 4th in the 800. Makenna Dunn made top ten in the 800.

Over at the shot put, Sophia Lynn- who has made big strides in the event since the beginning of the season threw a PR of 23-10. Kayla Dexter finished 4th with a 25-3 1/2. Ziona Christy also registered a PR in the shot.

Lainey Pierson finished second in the discus with a 75-02, just off her season-best of 77-03. She was joined int the top five by Melanie Snowden, who recorded a 4th place 60-01.

Finishing second in the javelin, Mea Monroe snapped off a season-best 76-04. Teammate Maile Scaglione made the top five with 57-00. The Challengers Makenna Dunn was less than two feet behind Scaglione with a 55-07.

Elle Harrington took second in the high jump with a leap of 4-06. Bella Williams and Maile Scaglione set PRs with jumps of 4’04” and 4’02” respectively; good enough to finish 4th and 6th.

We would remiss without mention of Sara Moore, Katherine Harvey, Madison Taylor, and Anna Horn- who competed in the 100-100-200-400 meter medley relay and finished 7th. Halle Bergen ran the 200.

All of these young women worked hard, and competed well. Their sportsmanship was outstanding, as they encouraged athletes from competing teams.

If yours truly can take his reporter hat off for a moment, and put his coach’s hat on, it was a real joy to work with this team, and will go down as a memorable experience. Speaking on behalf of the other coaches, thank you parents for your volunteerism, support and encouragement.

By the end of the week, Coach Fairbanks should know more about who qualified for the Meet of Champions in Corvallis, scheduled for May 23rd.